HISTORICALLY, GOLD IS NOT CHEAP AT TODAYS PRICES!

"Would I say there will never, ever be another financial crisis?   You know probably that would be going too far, but I do think we're much safer, and I hope that it will NOT be in our lifetimes and I DON'T believe it will be." -Janet Yellen

Possibly, yet probably NOT in your lifetime Janet since you are what, say eighty years old? Oh, only seventy, sorry acquiring sage wisdom must age a person.

Isn't it QUITE obvious that our situation is as serious as a heart attack, we are NOT any safer and the ONLY option you have left is to lie?  Lie like a dog, lie like a rug or lie through your teeth!  It is like one turtle standing on top of another turtle, standing on top of another turtle and another.  The corruption never ends, just as we saw in the past two weeks as metals price got slammed to benefit the Central Banks whom sell their paper options in mass while bilking those whom who own real metals of value.

WHAT HAPPENS WHEN THE DOW DROPS & THE DOW TO GOLD RATIO CLIMBS?

ONE OUNCE OF GOLD WILL AGAIN BUY THE DOW!

Just kidding, because they won't let that happen either, unless THEY are no longer in control and China, India and or Russia gains control of our broken commodity markets by owning the most gold.  Asia has rejected the West's unsound money system and is fixing it.  American's will suffer greatly when a new gold backed currency rules the global world.  The hegemony of the U.S. will have ended and we will become just another third world country replete with lots of immigrants with no opportunities, no jobs, food shortages and entitlement woes no government can fix.

Remember the Wizard of ID comic strip of the sixties and seventies?  In the first comic panel we see a small, tyrannical king addressing his subjects from the balcony of his castle and emphasizing the need for "peace and harmony".   The second panel depicts the King as he continues his speech stating,   "We must all live by The Golden Rule".  This causes much confusion among the slow, dim witted populace who are starving, cold and hungry, but then the king's courts troubadour stands to deliver the explanatory punch line.  "Whoever has the gold makes the rules!"

The 'Casino Paper Market' end game will steal the private individual's store of wealth again.  The turtles believe they can engineer the economy, the markets and create endless growth. They can because they have the world's printing press to do so.  You have NO GOLD when you are invested in paper markets.  Daily, I meet doctors, lawyers, engineers and business owners and ALL their investments are paper.  These are really intelligent people one would surmise, but not so much. They honestly believe they are safe and protected because they are protected and diversified because they have GLD gold stocks or SLV silver stocks.  Soon they will receive the education of their lifetimes, one they will NEVER forget.  They will grow old reliving their stories about the pain they have suffered and how they were swindled out of their life's savings in an effort to spare their children and grandchildren.  They will attempt to educate their offspring to save them from hard life lessons suffered at the knee of, 'the mother of all educations, experience'.  Their words will fall on deaf ears while the children only hear mere ranting of a fossil suffering from old timers.  They will nod their heads suggesting agreement and absorb no true understanding but one day, in another decade, they will recall his words but it will be too late.  So history repeats itself, over and over.

My best guess is, that in the next 3-15 months, we experience a 57% drop based on the 2007 drop in the stock market to 12,255 points or maybe much worse.  Next, if we utilize the average DOW to Gold ratio over the past twenty years of 20:1, we COULD see a gold price of $612 dollars.  The gold volatility rate is at new all time lows, which means the gold market is less and less appealing to traders and investors.  Sentiment is extremely low as gold has dropped 44% and has been moving sideways trading between $1200 and $1250 from 2013 to 2017.  Gold sentiment is downright boring and hands are being shaken loose and dis-hoarding is happening.  Selling is only brisk, since the first of the year, on dips in the $1125 to $1220 range.

This gold chart shows what I am thinking we are seeing with the price framework of gold.  The basis for this study I have referred to before and comes from a wise trader 'way back when'. 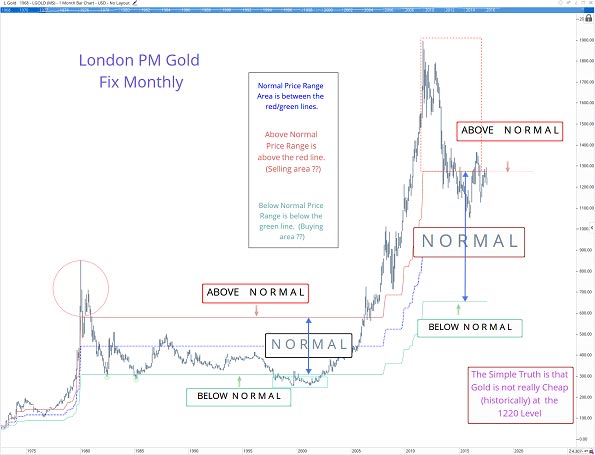 The simple truth is that Gold is not cheap at the $1220 historically speaking, but lies today within a normal range of $700 to $1300 price range!  Don't get me wrong, I am not saying to wait to buy IF gold bottoms out at $700 or below because if it does you will find the shelves bare.  However, historically speaking gold prices are somewhat ABOVE average in price. One simply CANNOT state that gold is cheap today!  This being said, I can't find anyone to agree with me other than Harry Dent and possibly P.Radomski who says the bottom is in and yet the price may go lower to our number.  My belief is that the price is going lower but don't wait to buy.

It is imperative that the sentiment for metals be driven to disgust, just as it was from 1972 to 1976 when gold was $60 and $105 respectfully.   It was in August of 1971 when then President Nixon removed gold from the gold standard Roosevelt had implemented and an ounce of gold was still $35.  The price had remained the same as Roosevelt had deemed it to be for 37 years after he instituted the Gold Reserve Act of 1934.  This act required citizens to turnover their $20 gold coins over to the government with the penalty of incarceration and rewarding them with a $20 dollar bill backed by gold in Fort Knox.  It was six months later when Roosevelt revalued gold to $35 dollars an ounce and in effect confiscated $15 of value from all whom had turned in their gold.   History shows us that when then President Nixon took the U.S. off of the gold standard in August 1971 people woke up and the gold price almost doubled to $60 in 1972 and then quickly rose to $200 per ounce.  Next, the gold price dropped to just over $100 an ounce from January 1975 to August 1976 shaking out hands in disgust before resuming its rocket up 850% in five years to $850 in 1981.  Today the gold price today has ONLY dropped 44%, 50% would be a price of $945.  Keep in mind that generally, when prices rocket higher, 80% of total gain usually occurs during the last 20% of its rise time.

Hands must be broken by whatever means to force dis-hoarding.  That it exactly what has been happening this past year since the July 2016 supposed breakout failed.  People have been selling not buying since January 2017.  Some of these customers need the funds but most are emotional owners selling to follow the herd back into the market or they.  Others are just sitting on the sidelines with worthless paper in the banks or their homes just waiting for the banks to fail, fiat currency to fail and many are absolutely paralyzed with fear of what is to come.   My graph shows an additional graphing explanation of the future for gold when you accept that history always repeats or rhymes.  If you super impose the past parabolic price increase of gold in the early 1980's to 2000 over the current parabolic rise in 2009 to 2011 gold could languish again for twenty some years before its next peak.  Will we have to wait for our due diligence and allegiance to metals to be rewarded?   Time will tell but are you willing to take that chance in the world we live in today?   Protect your family while you still can.