THERE WILL BE NO BULL FOR GOLD UNTIL THE MARKET CRASHES!

Fibonacci numbers, another Blood Moon and charts presenting ominous warning signs!  Control of this economic war, on the people of this world, by abnormal means of rigging, deceit and manipulation are prevalent wherever one turns and THEIR weapons of mass destruction are becoming VERY limited!  The warning signals are seemingly everywhere, yet the ignorance, apathy or greed of most is over shadowed by any rational to flee from impending harm and doom.

My chart shows geometric rectangles of REACTION after significant Down Moves.  UNTIL we make a move greater than the largest of these we have not entered an obvious up trend or BULL Market for gold! 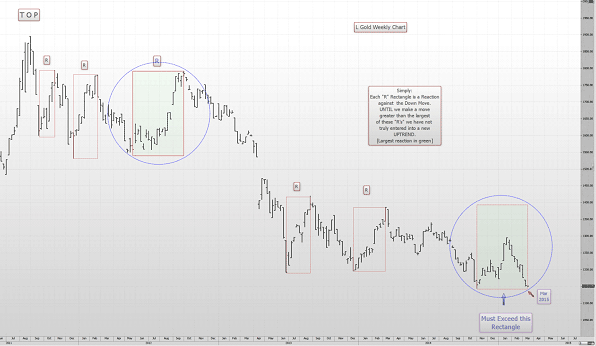 EVERYONE seems to be waiting for something to happen before they react and ACT, a lower low below to $14.50 or $1140 or another global terrorist attack.  Now the media appears to be priming us for yet another World War where our government will spend even more ruinous amounts of money, resources and the life or limbs of our most precious children!

The markets drop, and then continue to move higher, NASDAQ is now over 5000 as it was in the year 2000 right before the Tech Bubble blew up.  Most are lulled asleep as their 401k and IRA numbers are rising at an even higher pace than before the 2008 Housing Bubble exploded because of questionable sub-prime loans.   All is well and we are safe in American or are you really?

Two weeks ago the news reported that the Doral Bank of Puerto Rico was closed, the largest banking failure in 5 years w assets of $6 B and $4 B in deposits.  The FDIC will oversee 26 bank shutdowns and Banco Popular, the largest Puerto-Rico bank, will take over operations and assets and in Florida and New York.  Doral goes the way of other failed Puerto Rico banks including Western bank Puerto Rico, Euro bank and R-G Premier Bank of Puerto Rico shut down in April 2010.

In 2010 five Doral employees were charged w fraud and 2 more employees were indicted last week for fraud.  This past December the FBI raided a Doral bank's information technology office to look for information to explain a seemingly targeted kill of Spagnoletti, an Executive Vice President.  Spagnoletti had been in charge of mortgage and banking operations and the investigation pointed to a paid hit most likely accomplished to keep the V.P. quiet and protect those whom profited from these loans.  Depositor funds, multiplied perhaps 10 times over through the fractional reserve banking Ponzi scheme were then lent to sources and businesses' of questionable substance!  Just like the sleight of hand of a magician.  POOF!  Money created out of thin air and THEN POOF again money disappearing into thin air!

If you think it can't happen here in the U.S., think again!  Terrorist attacks on domestic soil are more probable than ever, WWIII is more probable, a HUGE Stock market implosion is more probable and banking failures are more probable as bigger banks, which absorbed the smaller banks, begin imploding.  It will be a domino effect of failures and worthless fiat paper dispersed to depositors compliments of the FDIC (Faithful Dependents of an Incompetent Corporation), of the United States of America!

I'd suspect a major turn in the stock market as well by late April as there is a Fibonacci Cluster of ten tops and bottoms and CONSECUTIVE Fibonacci turn numbers starting at 34 trading days through 2,584 days.  A total solar eclipse occurs during the Spring equinox this same period, another Blood Moon our third of four expected in the past few years ALL falling on Easter or Passover and the Feast of Tabernacles!

The stock market completed a DEATH pattern in 2014 and soon its 28 year DEATH pattern that started after the October 19th, 1987 stock market crash will complete itself.  If you can recall your own personal losses/earnings and stayed the course ALL your loses were recouped by Christmas of 1987.  Since that time, every 7 years, we have experienced corrections, 1994, 2001 and 2008!  I suspect, by the fall of 2015 we will see the  "Mother of ALL" crashes as our government and Central banks have used up all their tricks and looted ALL the real money, gold, in the past years.   We are at the end of our Kondratieff Wave, the end of our 60-70 year wave of growth.  Expect a long and hard, desperate economic winter of decline to last perhaps decades as Japan's has.

The chart appears to show a rally may begin as a key support level of $1200 has again been broken and today Yellen's words may move metals higher or NOT for a time as a significant bottom appears to be in!  Another scenario may be another decline as deflation pushes all commodities lower as most American's haven't discovered that gold and silver are the only true money and not a commodity.

The opportunity afforded all Americans today to buy gold and silver, I fear will not be there forever, and it is best that one utilize the current weakness in metals pricing to get your positions NOW, before it is too late to protect your family's wealth!