Herbert Hoover, the hyper-interventionist engineer stated, “It is my belief that a progressive movement is necessary to re-engineer the American Society.  My main objective is to eliminate poverty in the United States and to literally transform American society!  Other countries use scientific socialism and centralized economic planning and so will we.  Under my authority I will increase the Commerce Department’s budget adding some thirty divisions and raising budgets by 50% while hiring thousands of more government employees.  My plan is to centrally plan and remake American industry into prosperity.  My reasoning is simple; I have seen too much destructive competition that size=3leads to economic waste and the lawlessness of Capitalism which causes unemployment.  Labor lacks collective bargaining and SOME employees simply make too much money.  I condemn capitalism as destructive competition.”

Notice the similarities of our governance’s interventions today in their ego centered belief that they can change the outcome of our economy.  A misdirected and simple attempt to control financial disasters of their own making which are now developing on a regular basis and growing in magnitude.

Below in a chart depicting the DJIA, on it you can the devastating stock market crash of 1929 (the small blip), the dot com crash of 2000, the terroist attack of 2001 dip and the financial wizards mortgage crash of 2007-08!  Notice the prop of growth due to Q-E!  Do you think the markets are going to 20,000 or maybe 21,000?  Americans standard of living is higher than any other nation in the world and guess what?  We also have the farthest to fall! 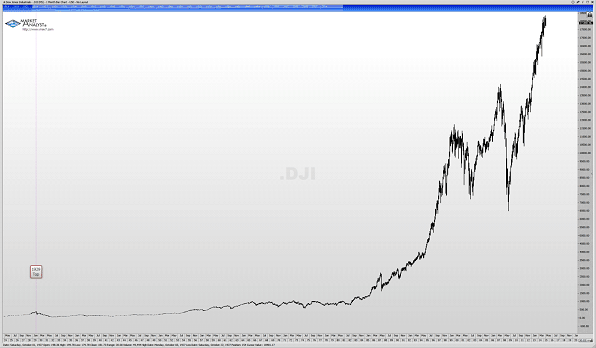 Martin Van Buren, on the other hand, made it clear in his inaugural address that he was an advocate of the laissez-faire approach.  Early on in his presidency he refused to neither take any action or intervene in seemingly endless banking failures nor interfere in the economic downturn the United States was experiencing.  He stated, “I believe that the economy must be founded on private interest, enterprise and competition without the aid of legislative grants or regulations of law.  I believe in Thomas Jefferson statement, ‘that government is best that governs least’ and I will fight for financial deregulation.”

This produced, in the end, the most stable monetary system the U.S. had ever had to that point in our history.  He felt that economic depression was never an excuse to expand government’s role or be used as an opportunity to get the Federal government to enact leadership’s favorite pork barrel schemes for improvements in ones districts or states.  These schemes were in his opinion corporate welfare used to build roads, railways or canals that create massive amounts of debt for the citizenry.  He refused to bail out states that had created massive amounts of debt for internal improvements and our government expenditures dropped 20% during his 4 year term.   He felt that prices should be left to fluctuate according to free-market forces and he championed free trade and low tariffs while keeping the United States out of entanglements of foreign wars.  His decisions were correct as our country’s depression lasted but 3 years!

Here in Colorado we have a local businessman that has been recognized statewide and nationally for his supposed business acumen and prowess.   His business secures government contracts for millions of dollars year after year with little real competitive bidding, awarded to his minority owned business and used for meaningless projects.  He receives all the monetary gain which is nothing more than government welfare that you and I subsidize!