Did you know?  The International Monetary Fund (IMF) just made a historic decision for international finance by adding the Chinese yuan to its basket of currencies.  The yuan joins four other currencies in the SDR basket including the U.S. dollar, the euro, British pound and Japanese yen and there is talk that more currencies may be added diluting the dollars damage even faster.

These currencies make up the global exchange unit known as Special Drawing Rights (SDR).  The SDR, created in 1969 is used by governments and central banks as a foreign exchange reserve to facilitate international trade and finance.  The yuan will be added to the IMF’s basket October 1st, 2016 and although the yuan is not currently backed by gold China could decide to do just that and back the yuan partially with gold unlike any of the basket of currencies today.

This newest addition by the IMF signifies that the international community now has a great deal of confidence in the yuan due to China adopting a more open, market based economic approach.  The Chinese currency will even rise above the yen and the pound making up 11% of the currency basket.   This increased stability will only rise in demand as the BRICS bank (Brazil, Russia, India, China, South Africa, U.K., Australia, France, Germany and Italy) gets set to exchange money in the Chinese yuan instead of the U.S. dollar for their international trade!

I have shown before that fiat reserve currencies only last a few generations, an average of 94 years throughout history, as all nations debase their currencies away from a gold standard to worthless paper at the people’s expense.  The U.S. has been off a gold standard since 1971 and as change is accelerated in today’s world the dollar will die before the average age as we are currently at 45 years.  ALL studies of fiat currencies show the average age is 27 years as I will explain further 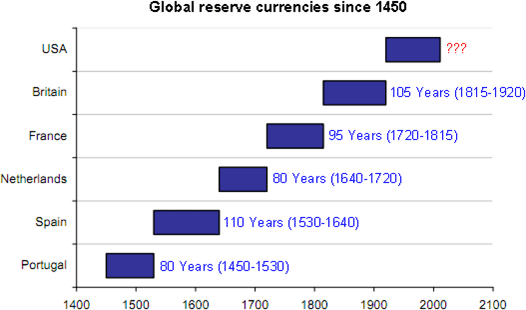 This is a huge event for China as the rising eastern power block has made it clear that it will cease using the dollar for trade.  As the yuan grows in global acceptance Americans need to understand what it means to the dollars they hold and how it will severely impact their standard of living in the next 50 years as the dollar ceases to reign as the king for global trade.

So how soon might the yuan replace the dollar?  While it may not be tomorrow, there’s no doubting that the free market is moving in its favor, and against the dollar.  The global stage for the dollar is being dethroned as the most traded currency and is facing strong competition from nations who no longer see any benefit from settling trade with the dollar.

In 20 years we WILL look back at 2015 and wonder why so many of us ever thought that the U.S. dollar would reign supreme forever.   History always tells us what the future will foretell if we only study it.  Reserve currencies only last a handful of generations before it is replaced so why would the U.S.’s dollar be any different?

Another monetary scholar Edwin Vieira wrote that every 30 to 40 years the reigning monetary system fails and has to be retooled.  The last time around for the U.S. was in 1971 when Nixon cancelled the convertibility of dollars into gold.  Remarkably, the world bought into an un-backed gold dollar as its reserve currency.  Kissinger arranged for the dollar to be used for oil trade, hence the petro dollar, in exchange for paid military protection for Saudi Arabia, United Arab Emirates, Bahrain, Kuwait, Oman and Qatar.  Now 40 years later it is obvious to the eastern world that our monetary system is irretrievably broken and will not survive, while OPEC is dead.  Saudi Arabia is already discussing options to de-peg from the U.S. dollar which would end the dollar’s petro status and be a catastrophe for the U.S. economy.  One would have to expect extreme volatility, uncertainty, and wholesale financial disorder to occur.

According to a study of 775 fiat currencies by DollarDaze.org, there is no historical precedence for a fiat currency that has succeeded in holding its value.  Twenty percent failed through hyperinflation, 21% were destroyed by war, 12% destroyed by independence, 24% were monetarily reformed, and 23% are still in circulation approaching one of the other outcomes.

The average life expectancy for a fiat currency is 27 years, with the shortest life span being one month.  Founded in 1694, the British pound Sterling is the oldest fiat currency in existence. At a ripe old age of 317 years it must be considered a highly successful fiat currency.  However, success is relative. The British pound was defined as 12 ounces of silver, so it’s worth less than 1/200 or 0.5% of its original value.  In other words, the most successful long standing currency in existence has lost 99.5% of its value.  Given the track record of ALL currencies the survival rate of all fiat currencies is zero.  You might think that this only happens in third world countries but you’d be wrong as the size and perceived stability of a nation’s economy does not discriminate because the leaders of ALL nations abuse their currency and their people suffer.

Economists and politicians want inflation as it is a way of redistributing wealth while only a small number of countries have a deflating currency compared to the number of countries with inflation.  It is amazing how a country’s government can survive for years by simply printing more money and supported by the fact that ALL citizens receive something from the system.  There is increasingly a failure to criticize government spending when only the 40% who work and pay the majority of the taxes have the courage to speak up.  The majority of the public is opposed to raising the debt ceiling, and opposed to government spending to create jobs, is partly from a desire to avoid inflation.

Consider this fact, we are at the end of a 300 plus year fractional reserve Ponzi monetary banking scheme and all nations are printing fiat faster than ever rushing to get to the bottom. Currencies will NEVER stop losing their value at your expense.  What have you done to protect your family before it is too late?