The price of gold historically remained stable for 200 hundred years up to 1914, except for the period of the Napoleonic wars from 1797-1821.

After the unfortunate war of 1809 against Napoleon the rate of the Bankozettel (the paper currency of Austria) went into a serious fall accompanied by rising prices.  The empire was forced to enter the “continental blockade” and was hit hard as imports on many goods was forbidden.  Those on fixed incomes were barely able to avoid starvation.  Corruption of civil servants grew massively.  Great fortunes were made by some; the stock market turned into a literal “gambling hell”.  The government made things worse by forbidding the publishing of prices in the newspapers.  The farmers calculated their prices according to the stock market price of the Bankozettels and became rich, buying jewelry and luxuries for their women, to save money in goods as soon as possible.  Real estate speculation bsize=3size=3roke out, and the prices of goods were rising into the sky.  Another attempt was made to reform the state’s finances, exchanging the Bankozettel against another paper money, backed by a mortgage on church properties (a practical assumption that they belong to the state and spread widely after the French Revolution). This attempt failed as well.

It took the count Joseph Wallis, the president of the Hofkammer, to resolve the issue.  He planned a de-valuation in utter secrecy.  The value of the Bankozettel was falling ever deeper, and the budget for 1811 planned a large deficit.  On 15th March, 1811, when everywhere at the same hour opened the envelopes with the “Bankrottpatent” over 1 billion Bankozettel were devalued and exchanged at a ratio of 1:5 for an “EinlÃ¶sungsscheine”, (a new fiat currency) as well as all taxes and other payments.  All copper coins were likewise devalued and the rates on state debt was cut in half (government bonds).  The police acted strongly against any price increase.  The “EinlÃ¶sungsscheine” were not covered in any way and yet by the end of the year they were accepted by the public.  It was promised, that under no circumstances would the amount in circulation be increased, however the promise was broken again in secrecy.  It took until the 1930’s before paper money was once again exchanged for commerce.  But for the moment the worst was averted.

One silver Gulden ($4.50 today) cost 110 Bankozettel as the war ended.  This was the first war whereby both sides were financed by the Rothschild’s banking family who has since ruled the world for 250 years.  When the inflation bore down on the people most suffered the pain of starvation and death.  History will again repeat itself as the engine of the banks divide the people and ignite the next war between Islam and Christianity destroying anyone who cannot escape to a safe place.

Notice the STRIKING similarities to what has occurred today.  There is NO WAY the debt, the U.S. and the world has accumulated, can ever be repaid!  The dollars hegemony WILL END one night in planned secrecy.  The elite banker’s plan to manipulate us will have succeeded.  Remember when the words of value “Silver Certificate” was removed from the dollar bill and replaced with, “In God we trust”?  The last piece of their plan is the COMPLETE failure and the next new One World Order fiat currency will be introduced and as some believe, is already printed.

All one needs to do is look at the commodity futures trading arena, started for convenience to sell one’s produce/commodity at today’s price for delivery in the future.  It has devolved into a casino game where a gargantuan amount of FAKE assets and a miniscule amount of REAL assets are bought and sold for future delivery by a series of Puts and Calls.  The earnings of a small group of wall-street bankers incur obscene amounts of money for corporations who use computer driven algorithms to enter and exit markets often making small and large amounts of digital money.  The “Real Producers”, knowing the value of their costs and income needs, are today UNABLE to arrive at any real true value needed to continue producing their wares.  We see it in the precious metals markets but as well for the farmer and their grain or cattle, for the oil man and his crude and ALL futures markets today.  Markets have devolved into a pathetic financial gain system benefitting those whom should not be playing at all, who produce nothing but personal gain.  The markets are desperate for change.  The producer, the worker, screams “market manipulation” because they are 100% invested as farmers, oil men, mining companies.  Most gave up on the rigged stock market after 2008 and some turned into gold bugs moving ALL their assets betting that the end game would come as surely as night, but it hasn’t, YET!

One must ALWAYS learn to emotionally detach and, “Buy on weakness and SELL on strength!”  In hindsight the 1981 drop in gold price to $250 until 2001 was an exceptional historical gold BUY flag for some twenty years.  We ALL should have borrowed money to stack gold during for those years.  I have customers that remind me about their stacks they started back then.  They enjoyed even more the 10 years that followed 2001 as their investments went up some 750%.  One remembers gold at $35 an ounce in 1965, a 3000% increase to $1050 in 50 years.  They are content when they report how much they are ahead in real assets over had they played the paper markets.  Where can you get that kind of SAFE return on your investment?  Some sold a portion after the first 15% drop in 2012 and more after another drop only to buy back in last year.  These curmudgeons knew that a real tangible asset is better than trying to hold onto air in a debt inflated stock market.  The Department of the Uneducated has done a marvelous job of insuring that 99% of the populace never owns any real assets.  They have never even touched a gold coin yet alone owned one. 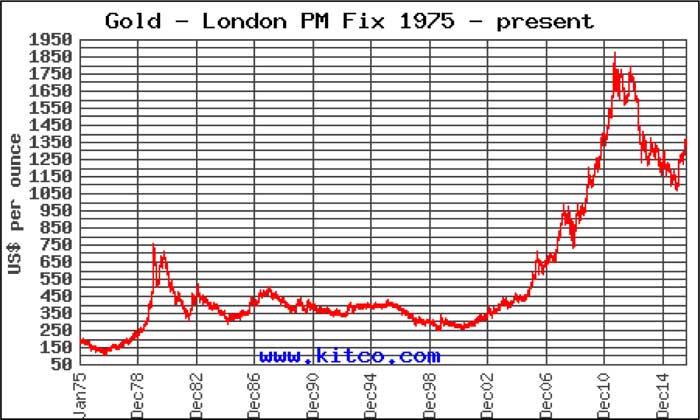 The reason I say that gold is NOT going to moon just yet is, REALLY look at this historical chart.  Gold increased in value from $100 in 1976 to $760 in 1980 a 750% increase and after its pull back meandered for some 20 years.  Now, do you really think the Bull market in gold has begun again, or could gold prices languish for other 20 years?  Mostly the gold bug has reacted emotionally to gold’s price drop feeling they have lost money in their tangible stash or angry at not participating in the historical 6 year stock market manipulation.  Either way, that is all behind us and most of us gold bugs will be dead in 20 years.

“It’s difficult to make future predictions, especially about the future!”, as Mark Twain said.  Yet, history ALWAYS repeats itself, UNLESS this is the end of the dollars reign and we gold bugs finally get, “Our just reward!”

One writer has called me, “just another mom that writes gold articles,” but you will never hear me say that I was right and everyone else is wrong.  What I do write is my best guess for the future after reading and perusing history.  What I have said is that, “Gold is not going to the moon just yet!  I have also stated that $36,000 gold an ounce is a REAL possibility.

If the 99% awaken to the truth that they have no TRUE money they may react and purchase driving metal prices higher.  Until then I recommend that EVERYONE buys gold and especially silver anytime you have dollars that are constantly losing value due to the erosion of value caused by your government.  The supply is always decreasing as Central Banks exchange their paper for gold.  Back up your truck if gold prices EVER again bottom to $300 – $1100, but don’t wait for those prices to return.  Something is better than nothing and nothing is just what you might get back from your bank, stocks and bonds should you wait for the next stock market collapse.  Today markets are a racket, a gambling casino totally unable to arrive at rational prices.  If you need cash your best option is to hold real assets and ship it USPS when you need to sell and funds can be wired to you. The other option is use it to buy what you need, any person possessing common sense would be glad to accept real money over paper.  Yet today, common sense is seldom common!