Skip to content
Janet Yellen will continue to print money so the status quo stays the same.  The stock market will continue its upward movement needing more and more printing to continue any increases in its trajectory.  This house of cards built on air will collapse by 50% with the slightest draft of wind.
The unemployment rates will continue to increase and is effectively 20%.  This will continue as more jobs are lost in an economy that produces little and is increasingly aged but uses and wastes more than it produces namely: fuel, heat, electricity, food, medical care, pharmaceuticals, housing, vehicles and customer goods that we believe we must possess, want and then waste.
We spend more than we need to as our homes are larger than any other nation in the world.  We consume more heating, cooling and electricity cossize=3size=3size=3size=3size=3size=3size=3size=3size=3size=3size=3size=3size=3size=3size=3size=3size=3size=3size=3size=3size=3size=3size=3size=3size=3size=3ts than anywhere else in the world.  We possess more vehicles per person than any other nation in the world, this includes all children and babies in those numbers.
Our baby boom population has aged past their usefulness and will continue to be a drain on our economy.  The population, close to one half, is over-weight and increasingly over spending for their current and future medical care costs, medicine costs while shortening their age span by some 10 to 15 years.  Antibiotic resistant microbes and the socialization of medicine into our new healthcare system will also lower life expectancies in the U.S.
http://www.aging.senate.gov/crs/aging1.pdf
I am sorry to note that the above government site is being updated. The report is not currently available.  This link will take you to a beautiful pictured site on aging but as usual the government site is currently shut down!
All wants and desires of the U.S.’s population have been meant through the creation of debt tools.  In the past nothing was outside of an American’s financial means.  Virtually anything one desired was made available and easily imported.  The world changed in 2008 and now those expectations are increasingly purchased at a future cost to our children’s, children’s children, our great grand children.   We can expect our debt to spiral out of control and land on our shores to engulf a nation of wasteful citizens their just reward
When will we start to repay our debts?  NEVER, unless we are forced to by China and the world because they no longer will use the U.S. dollar as a means of exchange for goods and services!
When will we begin to live within in reasonably sized homes and within our means? NEVER, unless we are forced to because the government doubles our taxes and our utility bills skyrocket!
When will we shed those extra 20 to 50 pounds of fat under our flesh?  NEVER, unless we are forced to because inflation has doubled the cost of groceries on the shelves of our stories!
When will we give up owning all the massive of amount of automobiles we do?  NEVER, unless we are forced to when hyperinflation forces gas to $10 a gallon.
The fact is that gold appears to be breaking down again as it is over-bought.   I think we are near support based on this chart (geometrically correct).  If we don’t crash thru those support lines (the bottom of the rectangle) we are headed up into 2014 and perhaps to $1646 – $1665 area. 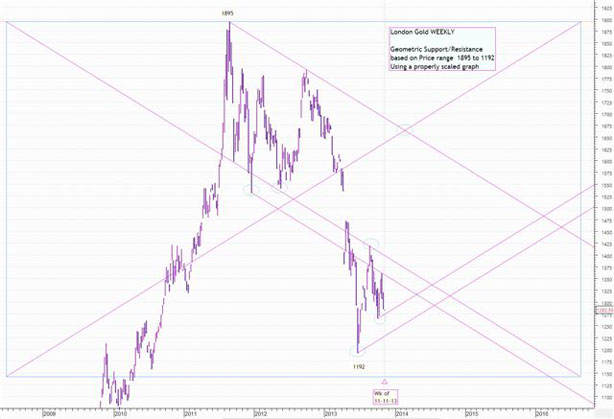 This scenario we all could live with! Overall I still feel we have one more nice up move, and from that a large decline into a good “place” to purchase.  If I’m wrong, and that would be a good thing, we will just start up and move to a place in price that I hadn’t even considered. 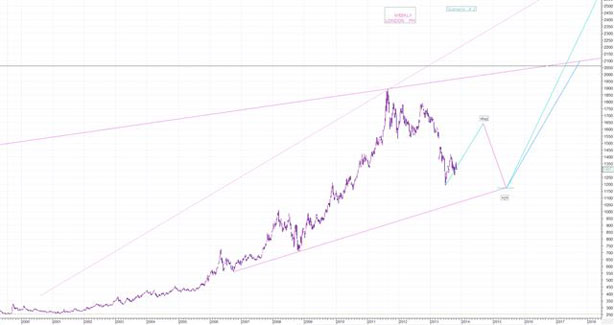 Now is the time to find yourself a dealer who can deliver and sell your purchases, one that doesn’t charge a commission when you sell (if you buy from them they should sell free for you).  It may well be your last chance as we adjust to what I believe will become known as “The Greatest Depression of the World” and the “New Economy” begins.  The defense of your wealth is paramount!   Protect your family and their well being while you still can!
http://www.gold-eagle.com/article/just-facts