Will it happen?  Emphatically yes it will, only the exact time and drop is unknown!  The initial drop in 1929 was 50% before the market recovered 25% of its initial drop.  Next the inevitable happened, the ruse was up and the run was on!  That is why some Wall Street investors were jumping out of windows. Everything they had borrowed and invested was gone in just 18 months by 1930. 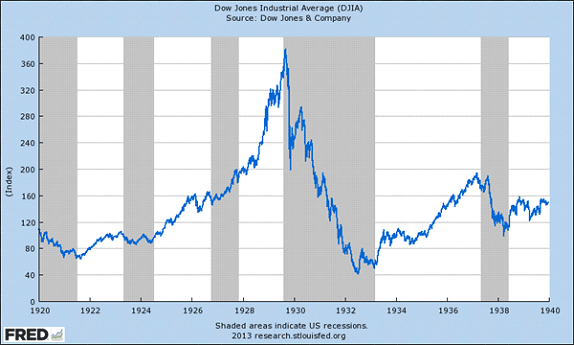 One year ago the Germany asked forsize=3size=3 their gold and we said we would repatriate their gold in 7 years.  One year later, in December, we returned 7 tons but not their original gold bullion!

What happens when China wants their gold back?  DOES CHINA KNOW AND ACCEPT THAT THE U.S. NO LONGER HAS ANY GOLD BUT HAS LEASED AND OR SOLD IT ALREADY?  Possibly China is playing a game as well, they understate their holdings @ 1 Ton while the U.S., “doth protest too much” by stating they have 8 tons.  Perhaps China realizes the deception of the U.S. so they are buying all they can at a discounted price with worthless dollars, courtesy of the Federal Reserve and banksters.  They also are spending their hoard of dollars on discounted U.S. properties.  Has our government already struck the deal, HR45 that states China will continue to purchase our debt bonds and should we default they will receive the power of imminent domain of all national parks, Federal lands and cities such as Detroit, Toledo, and others that are bankrupt.  IS OUR U.S. GOVERNMENT ALLOWING THE EAST TO TAKE CONTROL OF US THROUGH THE FEDERAL RESERVE?  THIS IS THEIR LAST HAND THEY HAVE TO PLAY!

History is merely repeating itself as their plan is to steal all America’s wealth and the government’s plan is to bring in the N.W.O.  By selling China back their gold at an extremely undervalued price China is appeased for the fact that they would never get their gold back because we no longer have it.  China will possess the new global currency the ‘renmimbi’ , get our lands when we default and give the elitist banksters control over the new World Bank so they will never work again or want for anything of material value as they will own it all and ultimately possess worldwide control over the peasantry.

Now if you are so greedy and resolute about staying in the market let me recommend, for the record, that the moment you see the market drop 25-30% that you sell immediately because if you don’t the aftershock will decimate all who elect to stay put!  When the market crumbles the physical markets will react correctly and send precious metals skyward.  The only question then will be are there any physical metals available for purchase and what will be their UNHINGED new prices?  WHEN THERE IS A CURRENCY COLLAPSE AND YOU TRY TO FLEE INTO GOLD, THERE WON’T BE ANY BECAUSE THE EAST WILL HAVE CORNERED THE MARKET!   The manipulation has gone on longer than anyone thought it could go on and the deceptive, crooked methods used to rig the markets appear to never end.   Is this the year gold and silver stage a big turnaround?

TODAY GOLD AND SILVER ARE AT 4 YEAR LOWS YET BUT LESS THAN 1% OF AMERICANS OWN ANY PRECIOUS METALS.  So where does the populace place their trust, in the investment banks and bankers, in a Justice Dept that declines to hold accountable those responsible for past and continued thefts or in a self serving government that doesn’t live by the same rules we are expected to?  The ‘American Dream’ has evaporated into the tainted air we breathe, poisoned soil that grow our food and water that we are forced to buy to survive.

Investors who are prepared, just as those during the Weimar Republic who owned land, machinery and livestock survived will survive what is coming.  People who are entirely in paper inside the banking system will be destroyed!

Today’s global fiat scheme is the largest in the history of the world even when we use period averages.  When it implodes in failure our lives and the world as we know it will be changed forever.  We will enter a new ‘Dark Age’ of centuries past perhaps called “The New Enlightenment”.  The masses will discover not that the world has entered into a new period of technological change and growth, a new ‘Kondratiev Wave’, but the enlightenment of the world’s people.  They will be enlightened and understand  that their old way of life was destroyed by the elite bankers and their paid lobbyists who bought our politicians for their Corporate Fascism.  As sure as death and taxes the end is coming and when it does if you haven’t protected yourself with gold and silver it will be too late!  Protect your wealth by placing 30% of your assets in physical metals and forget bonds and stocks!

Roxanne Lewis is a precious metals broker from western Colorado dedicated to educating others to DEFEND their family’s assets.  She writes weekly articles @ www.whynotgold.com under her weekly BLOG and ARCHIVED articles of the past.  VISIT her website that features visible, up to date pricing every second from COMEX.  Find out why customers say, “You have the lowest prices on the internet I wish I had found you years ago and I won’t EVER use anyone else!”  She may be reached @ rlewis@whynotgold.com