Here is a graph showing the price of gold FINALLY reaching GOLD’s “Long Term Line of Support” for London PM Gold!   One would expect that gold would begin its upward climb but usually the “Masters of Manipulation”  step in to quell gold’s direction.  Now we will just have to sit back, watch the “big shoe” and continue stacking at these prices! 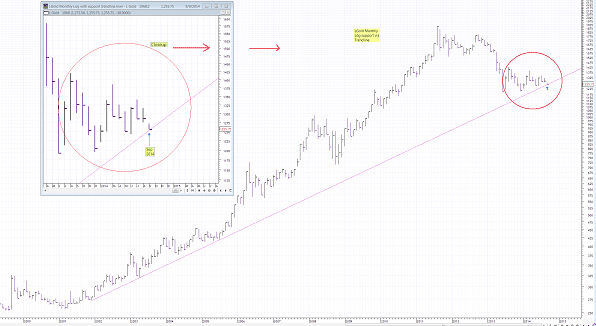 If you have NOT already divested of your accumulation of this quarter’s worthless paper by locking in with SPOT at 18.69 and Silver Eagles at $20.99 or Silver Buffalo’s at $19.54 be sure to lock in A.S.AP.   Rule of thumb is to pay as little as you can over SPOT and with ratio’s at 66:1 silver is by far the favorite to increase in value!

Also check your current dealers BBB rating and scroll down to read any complaints, most customers see the rating and fail to do so.  Customers have reported to me that more than a handful of big name dealers whom they have dealt with in the past have had their BBB ratings revoked for a myriad of reasons such as baiting and switching to numismatics of questionable value, non shipment or shipping that has taken several months.  Some are being sued for conflict of interests, closing, filing for bankruptcy or they have been reported to “Rip-Off Reports” for their misdeeds.  Bigger isn’t necessarily better and besides they usually require a booklet of information on you their customers.

The tip of the iceberg has been exposed, and I suspect more will be exposed for their practices.  Big name dealers will either be unable to meet their advertising budgets of $2 M or more a month or exposed for their other fraudulent practices.  Just remember there are “No Free Lunches” and if they are offering free safes or free coins you are still going to pay for their supposed “Free” enticements.  They have paid advertising psychologists that understand the most effective way to manipulate you with deceptive claims and practices.  Some even use campaign contributions to obtain connections that enable them to avoid regulation and accountability that are added on to the prices of the products you purchase.  If you respond to their expensive ads on T.V. or radio instead of doing your own research your investment will not return its potential maximum R.O.I.   Never rely on commercials with paid actors or politicians that hawk the wares of the big name companies whenmaking your consumer decision on where to purchase.  They cannot give you the best price or service when paying for advertising budgets of millions of dollars a year.

Remember this is a major source of revenue for media outlets and the result is expensive advertising that wastes a growing amount of G.D.P. without any improvement in your quality of life.  The problem is really a lot bigger than it seems and involves a lack of integrity of mass media which doesn’t hesitate to promote massive amounts of fraud everywhere one looks.   The politicians who make the laws, the media that provides the investigation and the government and business sector involved in these scams are ALL accountable.  Their scams increase their profits and finance their propaganda while the non-thinking majority accept their “false witnessing”.

Media outlets are supposed to provide public service, educational material and inform the public about current events and politics in return for the free use of the public air waves.  Instead these T.V., radio and now internet sources make tremendous amounts of money selling advertising to manipulate, persuade and separateyou for your hard earned paper money.  This same media is completely out of control when providing the public with objective information concerning the next election’s candidates and the biggest fund raisers skew the electorate and an objective process.  There is either blatant bribery, virtual bribery or legalized bribery going on right under our noses.  Those who spend the most win the elections and the gold!  Now do you see the correlation?  The public has absolutely NO way to influence the election process and ends up paying the price.  Get ready the mid-terms elections are right around the corner with billions spent instead of millions to steal the votes of the unthinking American or illegal voter.

The media has absolutely NO credibility when it comes to selling commercial time or covering important subjects that usually involve a conflict of interests.   Making things worse is our government whom has regulated the media so that only a small number of people have ALL the influence on the media that informs the majority of the public. Today there is no regulation, openness or accountability and the first amendment has been twisted by a system to provide protection for fraudulent speech that is rampant in corporate media.  Truthful, sincere speech is much harder to find and these scam artists feel safe that these warnings won’t reach the vast majority of their victims until it is too late.

Here is a graph showing the price of GOLD’s “Short Term Line of Support” for London PM Gold!  The wedge we’d suspect would turn prices upwards as the top of the flag is descending. Prices below $1200 would shutter gold mines across the world as producers would be unable to operate losing money however I’d rather doubt the masters would allow that to happen.  They need both gold and silver production to keep placing their naked shorts and without production both would skyrocket in price.  You see, like the Fed, they no longer have any tricks left in their bag! 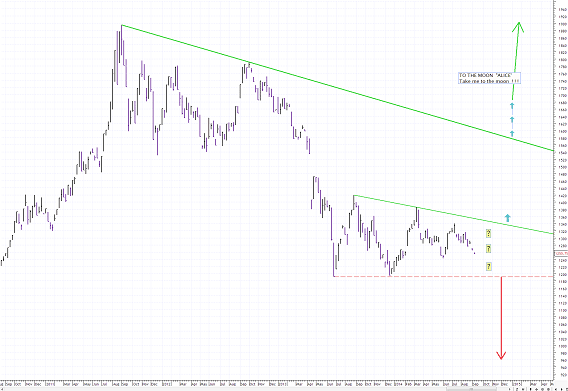