Oils recent drop below $50 has destroyed the 42 year standing ratio of gold to a barrel of oil, 15:1 which has been the norm since the 1972 gas rationing!   Such news, one would surmise, might send gold below $800 and other commodities as well similar to coppers most recent price decline.  Yet now we awaken to gold’s move up that has broken June’s 2014, 200 day trendline.  Does this signal a major move up?  If it hold till months end it just may!

It appears that we are seeing the signs for a deflationary move of most commodities as oil prices continue to stay under $50 and the ratio is currently 26:1  for gold to a barrel of oil!  Oil collapsed to $30 a barrel in late 2008 but was short lived recovering to $100 in just 15 months and most pundits expect the recent drop in oil to be short lived.  Oil companies saw their share prices double and triple in a couple of years.  But alas much has changed since then as global oil prosize=3duction has increased by some 3.85 M barrels a day of which 3.22 M barrels have been produced in the U.S. The increase was fueled here by shale oil technology of horizontal drilling and hydraulic fracturing w a breakeven requirement of $80 price and the demand in 2009 was increasing as well.

Over the past few five years the U.S. has experienced rising oil production and a falling demand which is the reason we have lower prices today.  The flood of U.S. oil production has eliminated much of the need for crude oil imports.   Yet we see global demand for oil growing as consumption has increased over the past 20 years, setting new records most recently.  It is WELL TIME (no pun intended) that our government lifts the oil export ban in place.  The Keystone pipeline must be completed and the counterfeit money created by the Fed. needs to be funneled into processing plants to move our new found RENEWABLE energy of oil and gas across the seas or soon we may see a major shutdown of the more expensive domestic extraction processes we currently are using.  Otherwise shutdowns will begin and job numbers drop precipitously.  Oil at less than $50 a barrel isn’t sustainable as the cost to produce shale oil is above that price.

This soap opera CAN and WILL change at any moment and are you ready for the devastation that will be in it’s path as the train derails? 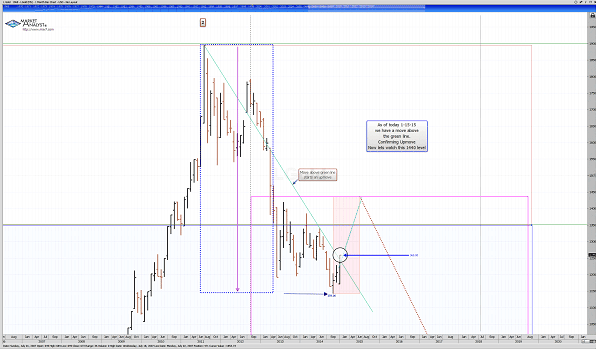 What will the F.O.M.C. meeting on the 27th bring?  The REAL truth of retail store closures, proof that holiday sales were less than lackluster, and layoffs that reverse all job growth of the past qtrs. become apparent.  Most likely the verbage will be vague yet rosy, “Economic activity is expanding at a moderate pace. Labor market conditions improve with solid job gains and a lower unemployment rate.  Household spending is rising moderately and business fixed investment is advancing, while the recovery in the housing sector remains slow. Inflation is below the Committee’s longer-run objective, partly reflecting declines in energy prices.” Dec.2014

One incriminating statement sums up that all is not improving, “The committee is maintaining its existing policy of reinvesting principal payments from its holdings of agency debt and agency mortgage-backed securities and of rolling over maturing Treasury securities at auction.”

Why listen to their lies as the world’s central banks continue their experiment to control currencies, capital flows, and their economic fortunes. They have created $12 Trillion worthless dollars since the global financial crisis started in an effort to prop up their failing banking system, ease their debt service, and revive the world’s economy.

If you haven’t jumped in yet, what are you waiting for a crisis?