We lost our country the moment Woodrow Wilson signed into being the Federal Reserve Act, which has no connection (in any real sense) to the federal government.  Today we have a President who is told who to nominate, a faked motion, by appointing its chairman Yellen at the moment.  The Fed controls the economy and whosoever controls the economy of a country, controls the blinking country!

The Department of the Uneducated taught us nothing in school about the workings of the Fed.  The five or so Federal Banks of the world will bring down our nation and the world’s nations, bringing the people to their knees.   We will then be totally controlled and forced to accept whatever dictum they spew forth!  Just like the Patriot Act, the Patient Protection and Affordable Care Act.  Their next Act lll and it won’t be popcorn or entertainment, except for them, will either be the failure of the banks or the dollar.  Take your pick, completesize=3size=3size=3size=3 with shareholder (serf’s deposits) bail ins or the finale fiat dollar failure with their New World Order currency!   We could only hope for a gold backed Chinese Rhenimbi world currency but that would mean that honest money would abound.  They won’t let that happen as the Fed owners could no longer increase their hoards from their working slaves.   The Federal Reserve Banks are owned and controlled by the few, the proud, the trillionaires who rule.

The controlled markets of today have done an exceptional job of convincing the masses that Gold and Silver are no longer money.  If you have studied history you know that gold has been money for 5,000 years.  The system educated masses now tolerate a system educated government that acts as if they know nothing of the real truth or do they and keep quiet to enjoy the perks of their employment?  Our government is controlled by the Federal Reserve bankers and the corporations they own, while their system trained serfs do exactly what they were taught replete with their media lessons they want us to believe.

The price of Gold will drop more, I suspect, but the window is closing to own any real money.  They cannot control gold’s value forever!  Today, we are seeing, our government attempt to outlaw real money by charging negative interest rates, enforcing a new Bank Secrecy Act complete with Customer Transaction Reports and Suspicious Activity Reports and a host of other means to scare the people from using dollars.  New Civil Asset Forfeiture and seizure laws keep us from even carrying dollars with us to conduct transactions.  Many countries already have made it illegal to complete business transactions in amounts as low as $1000 to $1500.  If you utilize cash of $50- $100 in many other countries like Canada, South Africa, Philippines and Panama they require an I.D. or passport to complete your transaction.  The government wants complete control of your money so they can control the masses.  Their goal is to insure that we use only debt instruments that utilize credit or cyber digits of money utilizing electronically exchanged drafts, wire or debit cards.  If they please they can flip a switch and claim a cyber attack and steal what little people have in the accounts OR declare their next crisis to whip us all into compliance start another war of their creation, that we in turn fight with our children’s lives and limbs.

You see a cashless society would guarantee a dictatorship, in but a few years, as power attracts and corrupts completely.  A cashless society is but a means to an end with total government control and the destruction of capitalism.  Expect more and more mal-investment as government controlled money and negative interest rate intervention destroy the normalcy of all markets.

One might surmise that as cash becomes illegal and interest rates negative gold and silver would become the only trusted store of value.  Those whom hold cash would start a run on gold and silver driving the prices through the roof.  Those whom had early on realized that metals were at their production price costs and who had bought, similar to today’s prices, would in time secure and reap the rewards of their forward thinking and beat those in power whom controlled the demise of the physical and cyber dollar.   Next the war on gold would begin.  But would a nation’s people turn in their gold to another Roosevelt to be swindled again?  Possibly, as few even know our history and without it will but repeat it!

This graph below shows the best scenario for GOLD and most widely expected end outcome. 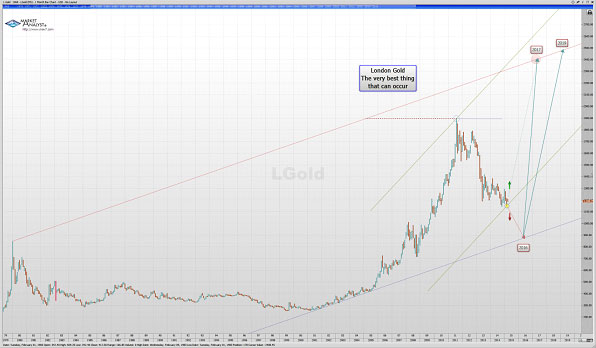 This graph below shows the worst scenario for GOLD if this protracted deflation continues before GOLD’s bull market returns. 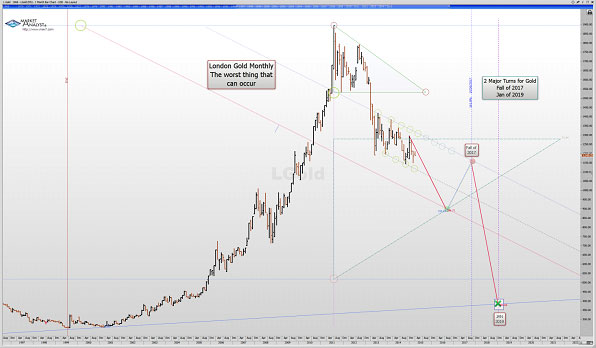 I suggest that you find a trusted dealer before the window closes because you WILL NOT be able to find, yet alone buy GOLD at $400 an oz in 2019 if prices drop to these levels.  The past month has proven that the U.S. Mint is having trouble keeping up with deliveries for demands of their coins with the recent dip in prices from the March 18th low.  I’d highly recommend that you protect your family before it’s too late!